Rangebound Markets &Low Volatility; Are We Due for a Break? | AFS Finance Group

Rangebound Markets &Low Volatility; Are We Due for a Break?

If there’s been a common thread across markets of late, it’s been the lack of volatility and a general wait-and-see attitude among traders. The VIX, which shot up to the mid-80s back in March, is currently sitting at 25, after setting a series of lower-highs at 44 and 38 in June and September, respectively.

Crude oil has been rangebound somewhere between $30 and $40 since the incredible price action we saw back in April. Gold has been in consolidation mode since setting a new all-time high against the US dollar in August and making a short-lived break above that all-important psychological milestone of $2,000 per ounce. It recently broke out of a symmetrical triangle, retested it as support, and has since been trading sideways since the bulls have failed to muster the energy to push it back up to those recent highs.

After setting new two-year lows in July, the Dollar Index (DXY) has been trading sideways between 90 and 93, while the Euro Index (EXY) appears to be doing the inverse of this; trading sideways at the top of the two-yearhighs it set in July and August.

As far as the central banks are concerned, it seems that the monetary bazookas that were brought out in full force at the height of the COVID-19 crisis earlier this year appear to be running out of ammunition or, at the least their effectiveness is waning.

Fed Chair Jerome Powell’s comments at September’s meeting have been largely received as jawboning with little in the way of actual policy change. He copied Mario Draghi’s famous “whatever it takes” line and referred repeatedly to the Federal Reserve’s monetary policy as “powerful.” In reality, all that’s on the table are the maintenance of interest rates near zero until 2023 and the continuation of the Fed’s current asset purchasing program until further notice. Powell referred to the new normal as being one of low interest rates, low inflation and slow growth, while calling for further fiscal stimulus from the government to help ameliorate the havoc wreaked on the US economy by the coronavirus pandemic.

Meanwhile, the Bank of England appears to be preparing to join Europe and Japan in crossing the Rubicon of negative rates. The bank’s monetary policy committee is reported to be working on clearing certain obstacles to the implementation of negative interest rates in order to allow the BoE to cut further from its current 0.1% rate. The policy of negative rates, which has been rejected in the past by the BoE’s interest rate committee, appears to have finally found favour as one of the last arrows in the central bank’s proverbial quiver. The cuts are expected to come into effect in 2021, with the current rate set to be maintained for the rest of the year along with the bank’s current £745 billion quantitative easing programme.

Similarly, the ECB has also opted to maintain its current course. Interest rates are to remain unchanged for now, as will the central bank’s Pandemic Emergency Purchasing Programme (PEPP) at €1.35 trillion. It was recently announced that the ECB is due to review this bond-buying initiative, with analysts expecting a possible increase by the end of the year. The only other notable measure to be introduced has been a recent relaxation of leverage ratios for European banks that will free up a further €73 billion in the banking system.

Calm before the storm?

Rangebound markets such as these can be incredibly difficult to trade. They sawtooth back and forth while moving sideways for extended periods of time, putting pressure on open trades, forcing margin calls and stop-outs on those who are more aggressively positioned. There seems to be no rhyme nor reason to the price action before a definitive break in either direction occurs and then it all makes so much sense in hindsight.

Taking a cursory look at the global economic climate though, you have to wonder whether the bias is to the downside for all but the safe-haven assets. Save for some completely unexpected piece of news such as a fully effective vaccine, there appear to be a number of worrying unknowns on the horizon to be navigated before we can begin discussing a global recovery.

Not only do we have a turbulent US in the run-up to a highly-charged election, we’re seeing new spikes in infections re-emerging in Europe as well as the re-introduction of lockdown measures in certain countries. Powell’s comments about low rates, inflation and slow growth bring Japan to mind. In a similar vein, the BoJ stated in 2016 that it would maintain a highly accommodative monetary policy until inflation rose above 2%. This never came to pass. Similarly, the Fed is now in the process of exhausting all of its tools while hoping for 2% inflation and urging for fiscal interventions.

Charts to keep an eye on

Even though the charts have been pretty quiet lately, we’ve seen a recent dump in US equities that begs further attention. The question about this sell-off is whether it’s the start of something bigger, or just a momentary blip before stocks grind higher as the giant tech companies, who have been among the few beneficiaries of this crisis, continue to buoy up the entire market.

What’s particularly interesting is the RSI divergence that has formed on the weekly charts of all the major US indices including the Russell 2000, the Dow Jones Industrial Average, the Nasdaq and the S&P 500. As is the case with technical indicators, the longer the timeframe at which the signal appears, the more you ought to pay attention to it. 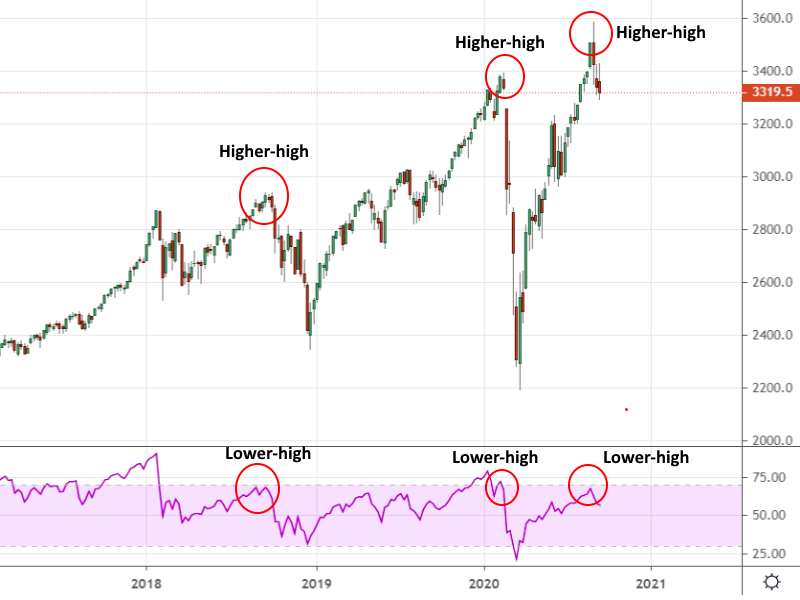 Above you can see the RSI divergence on the S&P 500, along with the previous two divergences we’ve witnessed. The first of which, back in September of 2018, led to a 20% drawdown. The second, during the first wave of the coronavirus, led to a 35% drawdown. It remains to be seen whether this latest one will follow suit, but it’s definitely something to keep an eye on. Particularly since we’re seeing the same divergence across US indices and at a longer timeframe. Could this be the next catalyst for increased market volatility? It’s certainly an intriguing candidate.

High Risk Investment Warning: Contracts for Difference (‘CFDs’) are complex financial products that are traded on margin. Trading CFDs carries a high degree of risk. It is possible to lose all your capital. These products may not be suitable for everyone and you should ensure that you understand the risks involved. Seek independent expert advice if necessary and speculate only with funds that you can afford to lose. Please think carefully whether such trading suits you, taking into consideration all the relevant circumstances as well as your personal resources. We do not recommend clients posting their entire account balance to meet margin requirements. Clients can minimise their level of exposure by requesting a change in leverage limit. For more information please refer to HYCM’s Risk Disclosure.